After the Pekin, Lincoln and Decatur Railroad was built through the township, the town of Warrensburg was located in the northwest quarter of Section 14. The town was platted by Warren and Durfee, and named for John K. Warren. Mr. Warren and Z. Boughn owned the land on which the town was located.
The first house in the new town was built by John Ritchie. Max Schroeder was the first postmaster. Samuel Ritchie had the first mercantile store in 1871, just shortly before the railroad was completed and Z. Boughn erected the first grain elevator. Mr. Jonas Hawood kept the first hotel.
The first school in the township was started in 1857. Sessions were held in homes and Miss Emma Dudley was the teacher.

Warrensburg was incorporated as a Village July 8, 1880 but the charter was not obtained until November 10, 1901.
The Warrensburg Times was first published on January 9, 1885. Subscription for one year was $1. The paper was published by Samuel Ritchie and his wife, Clara.
The State Bank of Warrensburg, established in 1895, was the first bank in the area. The bank closed in the early 1930’s. The Community Bank of Warrensburg was chartered November 26, 1974 and was started by several local businessmen. The building was constructed at the corner of Route 121 and East Main. The bank is still in this location and is now owned and operated by Buena Vista National Bank.

More history and updates to come…….

The Village Hall will be closed on Monday, February 21 in observance of President's Day.

It’s important to keep a current phone number on file with the Village of Warrensburg. This information will be kept confidential but may be beneficial in the event of an emergency.

A.C.T.S. Internet is coming to Warrensburg with fiber.  The provider will be A.C.T.S. LLC located in Moweaqua IL www.actscomp.com
They are currently working in the Village and will be reaching out to individuals once the fiber cable is installed.  If you need more information regarding their company, their website is www.actscomp.com.  Their telephone number is 217-992-2420. 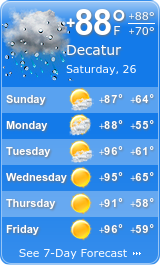